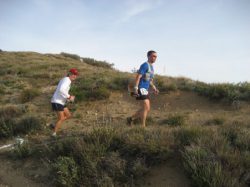 The first two lessons could be summed up around the theme of “timing,” whereas number three is mores about difficulty and endurance.

3. Recovery/Restoration is a marathon, hardly a sprint. (Maybe even one of those super marathon off-road things.)

It’s a process, a journey, painful at times, but a greater accomplishment than just going out for a run. In preparing for my marathon in 2004, when I ran my 16, 18, 20 mile runs all by myself, it was such a rush. Yet during the race, those extra miles to put me to 26.1 were so much more difficult – they were a completion of something.

The most brutal part recently has been the setbacks I felt after two months. The fact that I heard the word arthritis after a second MRI on a disc in my lumbar really frustrated me because it didn’t sound as if I would be without more back pain (official diagnosis was a tear in the disc between L4 and L5). I often remind folks of Jesus’ back-to-back-to-back ministry circus when on camps or in seasons where long endurance is needed. Mark is the “action packed” gospel of the four, leading some to believe he uses words like “immediately” for his less educated audience, yet it is Matthew (14:13-16:12) where Jesus seems to go from one event to the next. There seems to be no slowing down in this season. Words and phrases like “immediately” (14.22), “and” (14.34; 15.10, 21; 16.1), “then” (15.1), and “went on from there” (15.29) make it a continuous action from one pericope to the next. Just as Jesus had to be tired with all those events, so are we in recovery. But rest doesn’t always come!

Luke tells the story of the feeding of the 5,000 following Jesus’ sending out of the disciples to preach and heal. I picture people getting back from a missions trip and then having to feed 5,000 after they thought they were “done” (Luke 9). I think recovery is like that. Doctors say it will take so many weeks before you will feel better, but when you are seeming to beat their timetable, we often hit a hiccup in what might become our new expectations.